Warning! The link I am about to lay on you starts to autoplay some great music. It's by a band out of Los Angeles called NO and I think they are very good. Of course, this is an old guy talking, but an old guy who had enough love of good music to spend four days in the cold and rain to catch artists like Santana, Led Zeppelin, Frank Zappa, Pink Floyd, Pentangle, and Fairport Convention at the Bath Festival in 1971.

That said, here is the link to NO. And here is a photo of the band I snapped as they were performing "There's a glow" on the rooftop of the Rio in Las Vegas last summer. 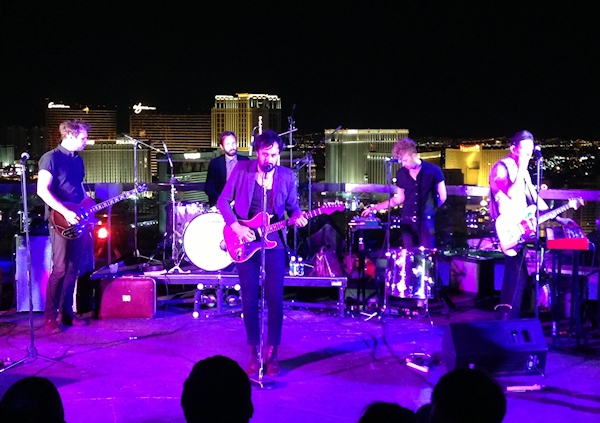 The significance of the setting, high above the Vegas strip, comes partly from the opening of the song that goes:

The other aspect of significance, apart from the amazing view and the electrified atmosphere of the up-close performance, is that the band is playing at a party thrown by my employer, ESET.

And I have to admit this was not my first time seeing the band live. They played an ESET party in 2012 as well. None of which would matter if the band was just okay. But in fact they are awesome when they play live, managing to create a huge sound without it becoming noise, and often generating powerful emotional tension by restraining that big sound until just the right moment.

In February of 2014 the band releases its first LP, with 7 new tracks on top of the 6 you can hear live on the website. Stay tuned to their site for fresh tour dates and try to catch them live. You won't be disappointed.
Posted by Stephen Cobb at 23:12